Posted at 11:59h in News by adrianwilcox 0 Comments
1 Like 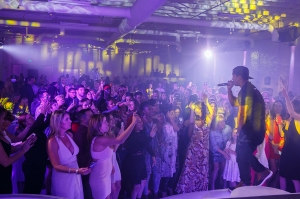 The competition was fierce during the live auction as guests had the chance to bid on sought after items including a Cuba Experience trip hosted by CANVAS founder, Nicole Henry; a one-week lease of the newest, sleekest, Aston Martin; a VIP package to the Kentucky Derby; and tickets for two to Hamilton and five-star accommodations at The Plaza Hotel, just to name a few of the outstanding items available for bid. Ja Rule went home with a one-of-a-kind original painting by Pipsqueak Was Here!!!, part of the 2016 official CANVAS artist lineup.

“I am so grateful for everyone who attended and graciously donated to this important cause,” said Nicole Henry, founder, and curator of CANVAS. “Through their generosity and sponsorships, we will be able to create a curated show filled with visionary masterpieces that will broaden the mind and inspire creative excellence. I can’t wait to show you what these internationally acclaimed artists will bring to our city.”

Billed as the nation’s largest outdoor museum show, CANVAS will transform Downtown West Palm Beach on November 11-20, 2016. Starting this year, CANVAS will be centrally located along the busy Flagler Drive, directly across the Intracoastal Waterway from Palm Beach. The green space will be built into a world-class outdoor museum accessible to the public year-round with rotating exhibitions and its annual show in November. Artists from across the globe will create monumental installations and murals in the Kids Art Park, Chamber Park, and Installation Park, part of the multi-phase project launching this November. Similar to last year, there will be a menu of exciting free and ticketed events as we celebrate the annual exhibition.